Why are pictures worth a thousand words while they don’t tell the full story? Photos are good at hiding a thousand feelings. In this post, I will use some images to talk about some of the things I hate about travel. If only traveling were all about teleporting to a destination, looking all cute in a bikini on a beach bed and most times asking the charming waiter to serve you a coconut drink that always looks perfect on the gram. Here are my personal experiences might make you dislike travel.

Pictures do not tell the full story. Photos are good at hiding feelings

Have you been arrested during your travels?

There’s that time we took photos of the New Jinja Bridge in Uganda since we missed the “No Photography” sign. (Story for another day).

Lesson: Learn to be observant. If you are unsure about taking photos, ask around or don’t take a picture at all.
Most police officers in Africa will ask for a bribe. It gets worse if you refuse to pay.

I don’t remember who took the photo below, but I remember the date being 27th December 2016. You see, I was at the peak of pain, emotional pain that I had held on to since 2014. The kind of pain that would make breathing difficult and have me sleeping in a fetal position every night.

There’s a quote that goes “may you be as happy as you pretend to be on social media” That quote applies to this picture. I wasn’t happy. I was an emotional mess, but this picture below won’t mention that now will it?

Lesson: Don’t wish to have someone’s life no matter how perfect their life seems to be. You don’t know the “demons” they fight daily. Live your life. If social media is depressing you, take a break from it. It’s never that serious.

This picture was taken in Dubai after a night out in a club called White Dubai. The name fits because everything was white from the decor to the crowd. That night I only saw two black people at the club, my friend and I. Ok. So maybe one other black person.

Scammers take advantage of everyone and anyone

Anyway, I digress. Later on our way home, a driver approached us.

This man, with no shame, tried to charge us three times the standard rate.

Still, on tales of shameless service providers, in the picture below we were charged two times the regular price in Naivasha, Kenya to walk with animals at Crescent Island Park. We only found out much later we had paid the extra. The fact that the cash collector didn’t give us a receipt or offer us a guide should have been our first signal.

Lesson: Most travelers tend to assume this applies to only white people. While its right white people are an easy target, this has happened to me several many times that I now know better. Race plays a little part in it but the moment a service provider realizes you are not a local from the way you speak, you are getting overcharged for sure. If for instance you live in Nairobi and you go to Mombasa on holiday, the fact that you talk that you are Kenyan will not protect you from being overcharged. Always find out the price beforehand to avoid such cases.

In Africa, you are stuck with public transport because an hour’s flight will cost you USD 300. That’s a one-way ticket in case you are wondering.

Public tranport services in Africa do not respect time

Enter public transport services in Africa that do not respect anyone’s time. Public transport in Africa is excruciatingly slow and exhausting. If you do not have self-control, then you better have the cash to pay for the super expensive flights. I believe this is why Africans do not travel in Africa. Every experience is a test! For crying out loud, even Jesus was tested three times not a thousand.

Lesson: In Africa, a distance of 6 hours can easily take you 12 hours, unapologetically. To be on the safe side, if you understand that traveling via public means will take you 3 hours, be kind to yourself and set aside 6+ hours.

If you look closely at the picture below, I have eye bags that I got from spending three nights on the MV ILALA ferry.

Intruders and catcallers happen when I travel alone.

A stranger approached me as I set up my tripod to take photos of myself. He insisted on taking the picture below.

I decided to be nice and let him take the photo. Big mistake. He decided to invite himself to follow me around the museum while acting as my guide. He even wanted to be part of my day’s plan, and this was the point I told him he was making me uncomfortable. Did he stop? Heck no! I believe the word uncomfortable does not exist in his world because this man told me he wanted to marry me. The fact that I had a ring on didn’t seem to put him off. I managed to get away by giving him a fake number and promising to receive his call once I switched on my phone. I’ve never seen him again since then thank God.

Lesson: Ignore catcallers. They are annoying anyway. If it’s an intrusive local, end the conversation with a firm no unless you feel you are in danger. Say a firm no and walk away.

Lesson: Anything can happen anywhere no matter the location. Invest in travel insurance everytime you travel. 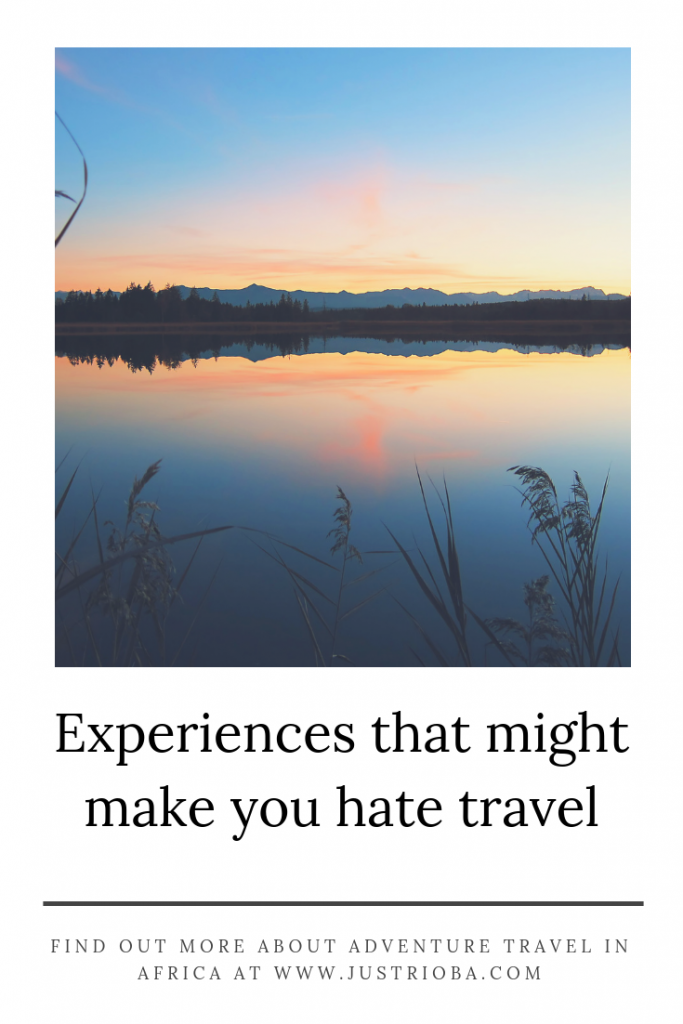