Burundi officially known as the Republic of Burundi is one of the least visited countries in Africa. Bujumbura, Burundi’s capital is less than 6 hours from Kigali hence making it the perfect destination for someone that loves adventure.

We made the mistake of thinking that we would get an afternoon bus that heads to the Rwanda-Burundi border. Kigali is not like Nairobi. Buses don’t travel at any time and so we had two choices, either stay in Kigali for another night or get a cab to the border. We went with the latter decision, another mistake because we were charged an arm and a leg.

Anyway, the cab driver told us that he will use the shorter route to get to the border and true to his word, we arrived at the Nemba border less than 2 hours later. However, if you are going by buy, my best bet is that you will cross the border into Burundi via the Akanyaru border.  A bus ticket to Bujumbura from Kigali should cost you RWF 6,500. Soon we were stamped out of Rwanda and in to Burundi. One of the officers took a look at our passports and joyfully said ” ah. Watoto ya Kenyatta. Karibuni sana. ”

We had bigger problems. Burundi like their neighbors Rwanda did not have buses operating at that hour so we had to proceed to Bujumbura with old shared taxis. The lesson here is that unless you are driving yourself, plan to travel from Rwanda to Burundi as early as 8am to avoid using taxis.

Two shared taxis later, we arrived in a town called Ngozi.  By now it was 7 pm and no chance in hell we were we going to going to get a bus headed to Bujumbura at that hour. I had made acquaintance with a Burundian man that could speak Swahili and he advised us to spend the night in Ngozi before proceeding with our journey to Bujumbura the next morning. Rioba was too stubborn to hear any of it. I was so keen on getting to Bujumbura since our host, the owner of Aparthotel Jardin Tropical was expecting us. The kind man bargained our cab fare in Kirundi and from the look of things it was a haggle. He finally resigned, asked us to stay one more time and seeing he couldn’t convince us to stay. He asked the can driver to take us to Bujumbura.

We arrived at the capital at about 9.30pm but not before being stopped by policemen who then asked for our national ID’s. We handed in our passports to one of them who after checking mumbled something in Kirundi to the cab driver that ended with “Kenya”.  During our stay in Bujumbura, policemen would stop us a couple of times to ask for our identification documents. I found it rather unusual.  What’s more is that we would constantly see policemen. They were everywhere. It’s like they were always in a rush to get somewhere with arms brandished. Upon asking, someone confirmed to us that indeed, there was political tension in the country at the time of our visit (April 2018).  Did Rioba panic? Nope! I had survived a military coup in Zimbabwe so I would get through this one too.hehe. Seriously though, other than cops being all over the place, Burundi seemed at peace and none of our plans were disrupted. However, I’d advise anyone seeking to travel to Burundi to first seek advice from their home embassy.

Thinking about taking a road trip to Rwanda from Nairobi, Kenya? Here’s everything you need to know.

How long is the journey?

Traveling by road from Kigali to Bujumbura should not take more than 6 hours. 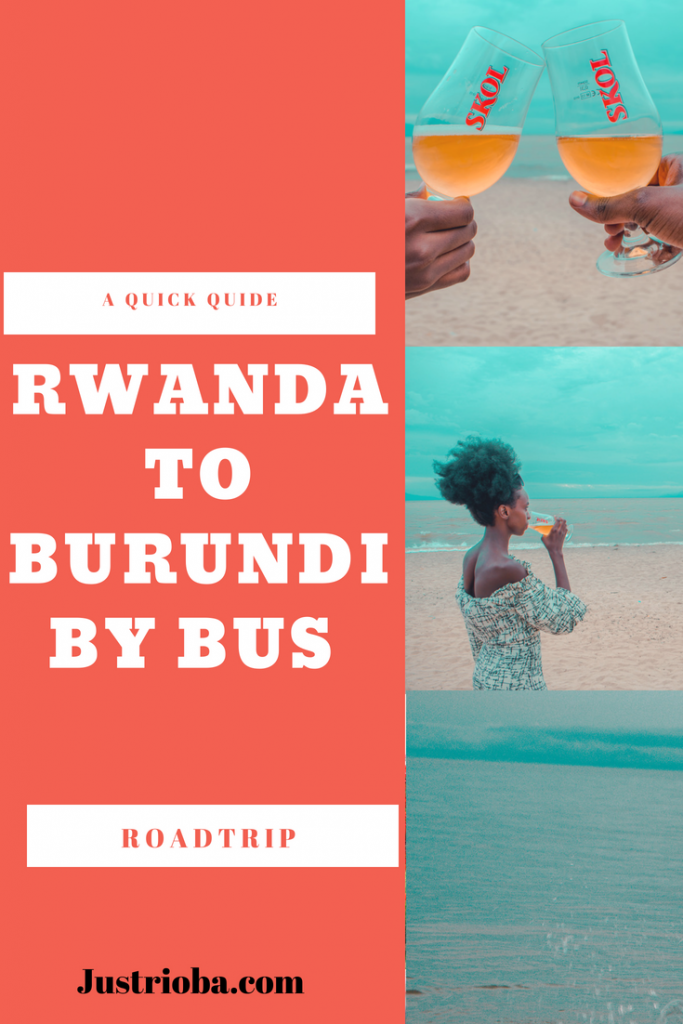